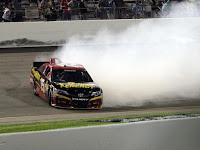 The NASCAR universe is up in arms over the latest fix in Richmond, but what about the poor Fantasy NASCAR players. I say this half jokingly, but some Fantasy NASCAR leagues feature cash prizes in the thousands, and Saturday’s Richmond chicanery altered these contests.

NASCAR has always been chock-full of conspiracy theories. The loose structure of the sports lends itself to JFK-9/11-Chemtrail type thinking. There aren’t referees dressed in stripes, not one fan has read the rulebook, and millions of dollars is involved. Just as the Earth is the perfect environment for life, NASCAR is an incubator for cheating.

The Fantasy NASCAR world will write off Clint Bowyer’s intentional spin. They’ll forget about his Michael Waltrip teammate, Brian Vickers, slowing down to give up spots. Fantasy NASCAR and NASCAR fans in general know what they have gotten themselves in to. They enjoy cheating.

Cheating separates NASCAR from other American Sports. Football, baseball, and basketball pay homage to the virtues of athleticism and sportsmanship. NASCAR owes it heritage to outlaw bootleggers. The ethos of rule bending and law breaking has always been present. Modified engines, cheating for teammates, systematic top-down fixes; these are not Santa Claus or the Easter Bunny. They are real, and NASCAR fans love it as a history, but hate it in the present. And for Fantasy NASCAR fans? They’d cheat too, if they could.
Posted by Race4thePrize at 3:23:00 PM