The Weekly Fantasy NASCAR Podcast is available at FanVice.com. 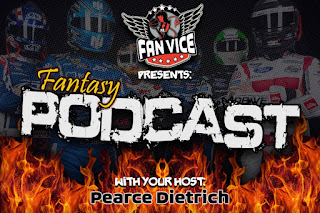 
Link to DFS NFL Spreadsheet in Google Drive
Posted by Race4thePrize at 10:41:00 AM No comments:

Email ThisBlogThis!Share to TwitterShare to FacebookShare to Pinterest
Labels: nfl

For Elliott, this marks the debut of the No. 9 on the sides of his Hendrick Motorsports Chevrolet, which formerly carried the No. 24. And for Almirola, this will be his first formal outing in the No. 10 Ford since joining Stewart-Haas Racing in the offseason after a six-year tenure with Richard Petty Motorsports.

NASCAR projections are getting closer

I have begun remodeling the Daily Fantasy NASCAR projections based on insight from Malcolm Gladwell's Blink.
Posted by Racer X at 10:20:00 AM No comments:

No one to blame but myself. Watched another terrible Terrence Malick film, "Song To Song." It was cool seeing @TheBlackLips for 1.5 seconds.
— P (@Race4thePrize) January 3, 2018

Bright is good, but nothing special. The sequel will likely be much better.
— P (@Race4thePrize) January 2, 2018